Warning: "continue" targeting switch is equivalent to "break". Did you mean to use "continue 2"? in /nfs/c07/h03/mnt/173146/domains/projecttraintracks.com/html/wp-content/plugins/revslider/includes/operations.class.php on line 2364

Warning: "continue" targeting switch is equivalent to "break". Did you mean to use "continue 2"? in /nfs/c07/h03/mnt/173146/domains/projecttraintracks.com/html/wp-content/plugins/revslider/includes/operations.class.php on line 2368

Warning: "continue" targeting switch is equivalent to "break". Did you mean to use "continue 2"? in /nfs/c07/h03/mnt/173146/domains/projecttraintracks.com/html/wp-content/plugins/revslider/includes/output.class.php on line 3169
 Favourites Archives - Project Train Tracks

A double mountain spiral Granny suggested? A challenge? We accept! So here it is and we have sent the link to Keira and Arya’s granny to prove we did it. And yes we did play with a little reverse footage just to spice things up ☺ There were a few tumbles but it was a great track to play with and we left it up for several days. It was actually quite sturdy!

So for this one it was Arya and I. She had decided that the trains needed at least some sort of changing of tracks or directions. So she proceeded to grab trains off the train set as they went round. Sometimes they went back on, sometimes they disappeared never to be seen again. She enjoyed herself and it was fun. 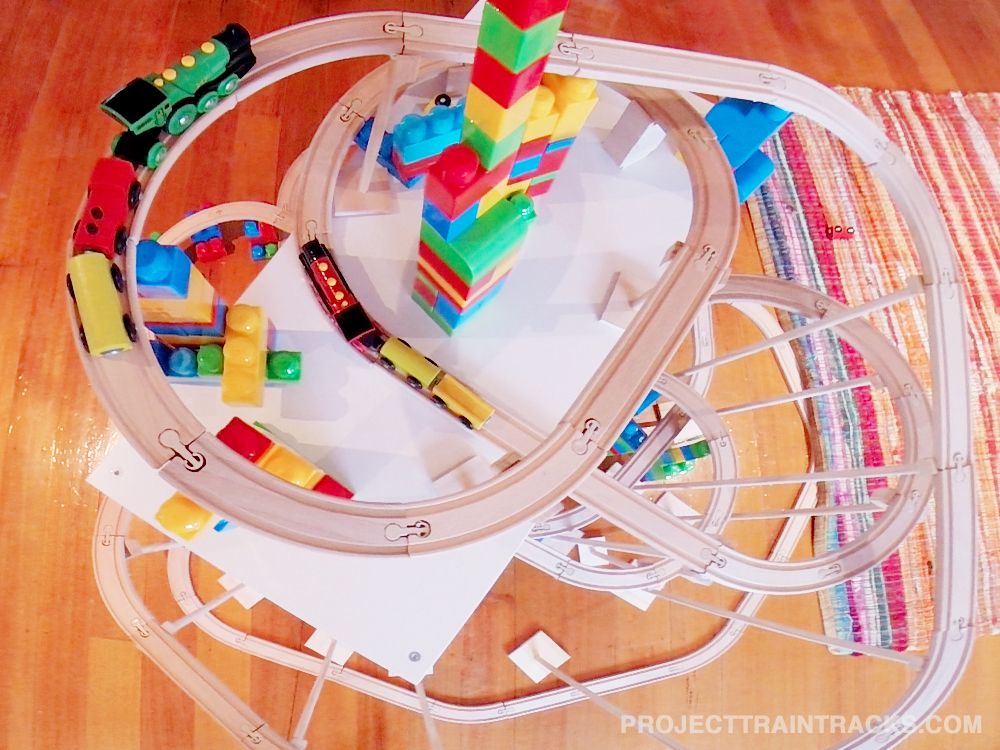 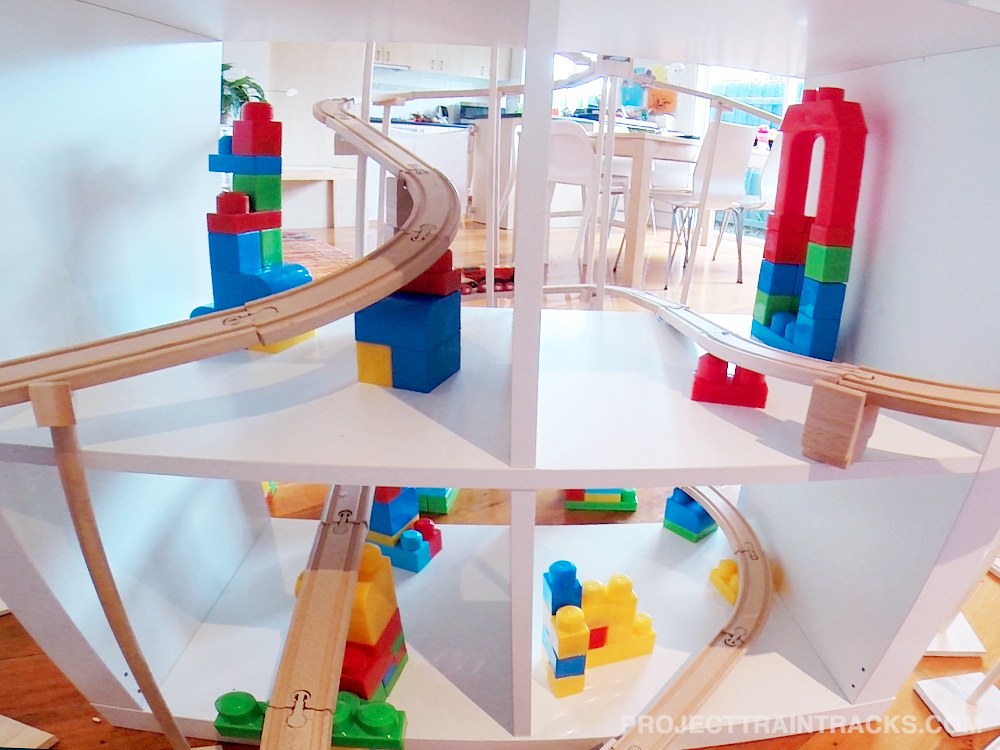 Which toy train track would you choose? 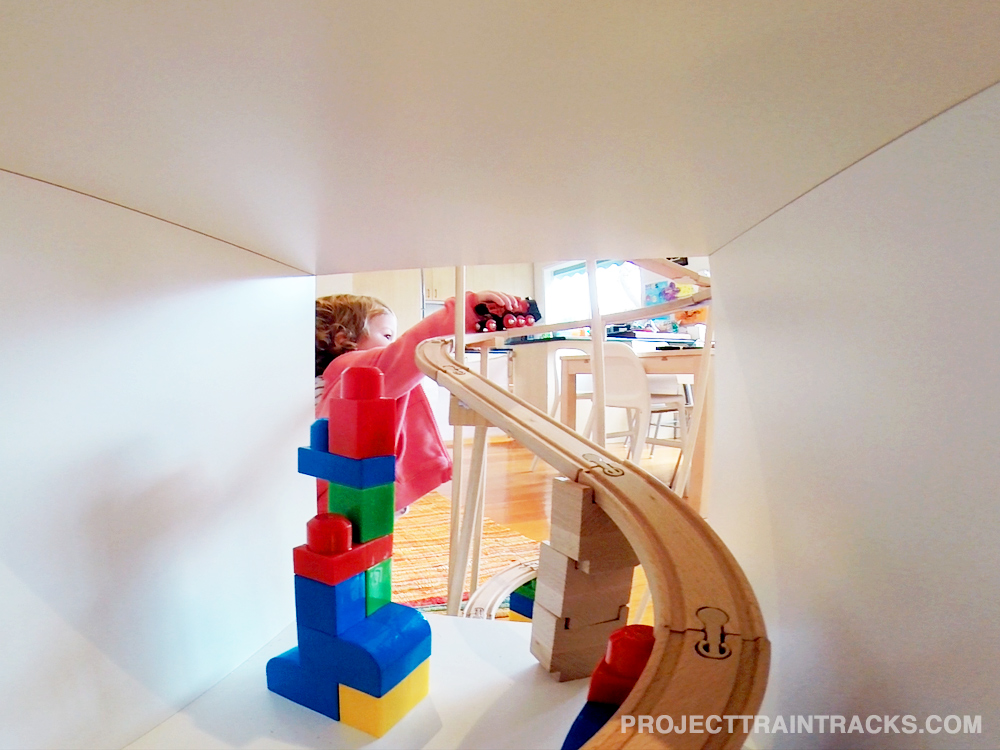 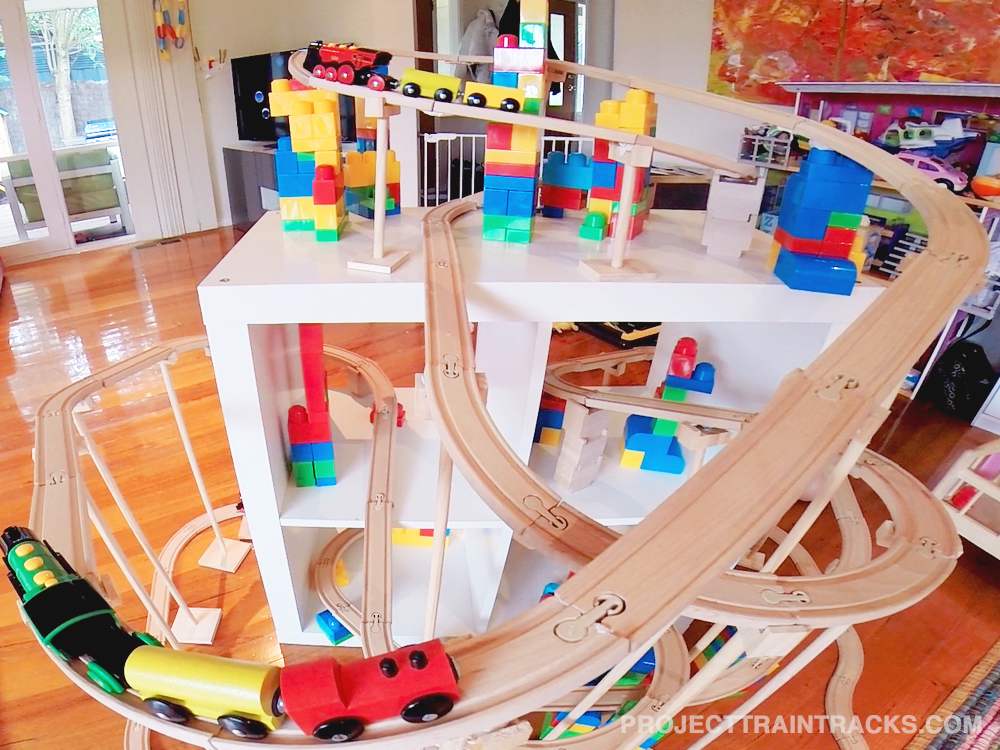 One of our trains sets with Mega Bloks supports 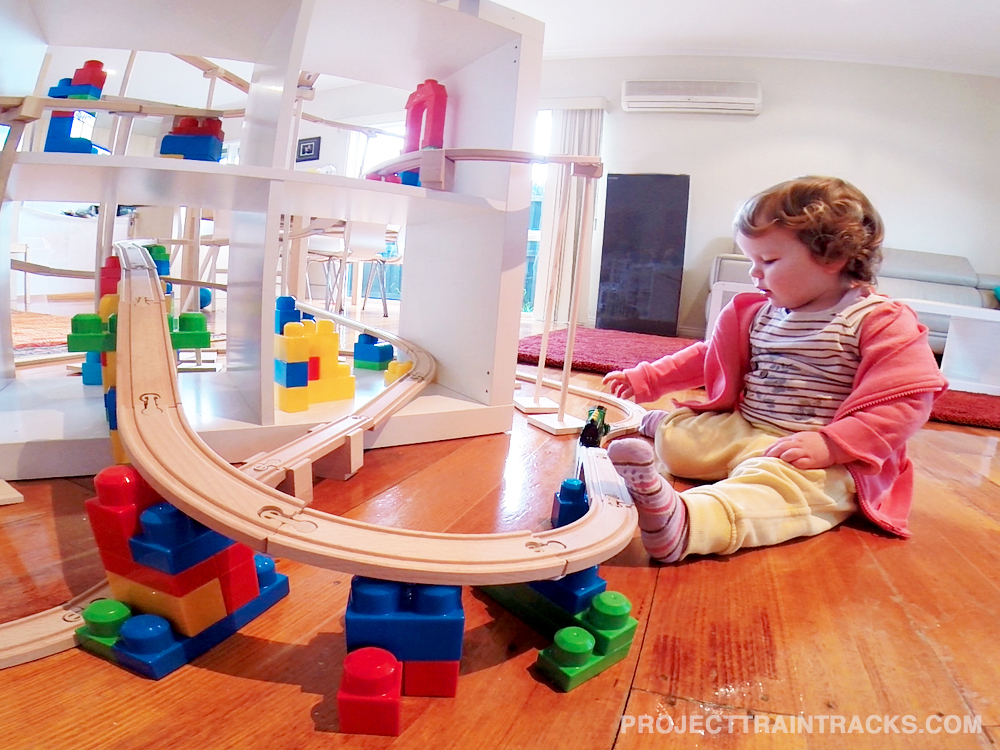 Back home this week and we had the Mega Blocks out again. This time is was a massive forest of mega block toy towers and ramps. The bends were a little tricky and we had the engines going round at a really good speed — although we did have a couple of falls! But our trains are hardy — especially our little green train so no harm done. Keira insisted that Peppa Pig was included so she has pride of place on the shelves! We think our mega block train set was a huge success! 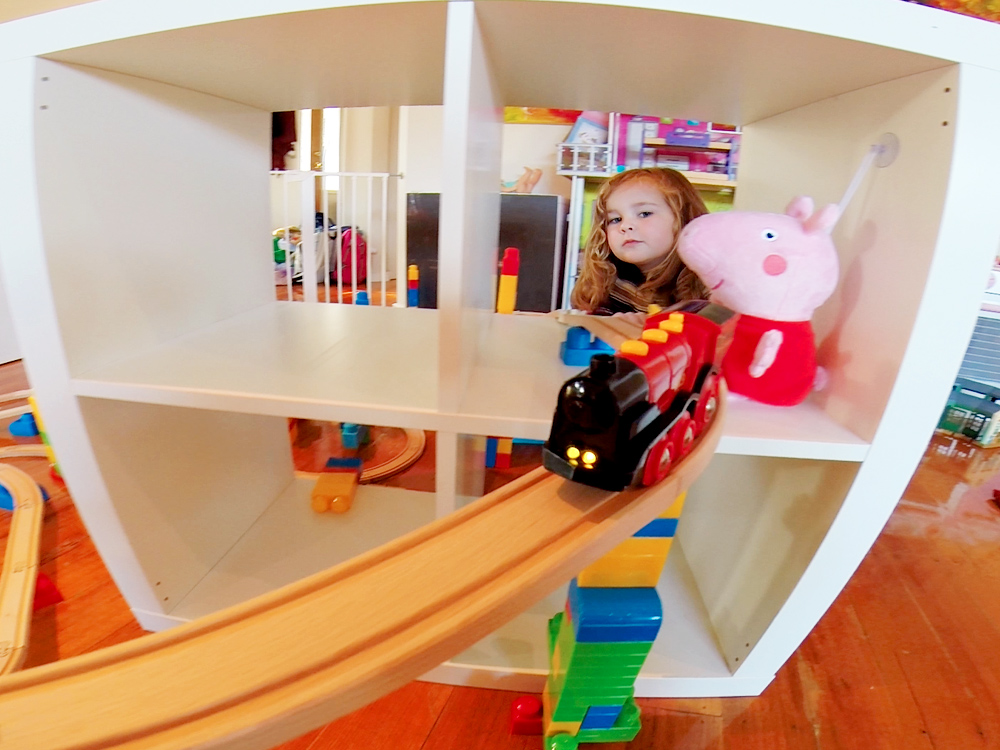 The official conductor for our toy trains 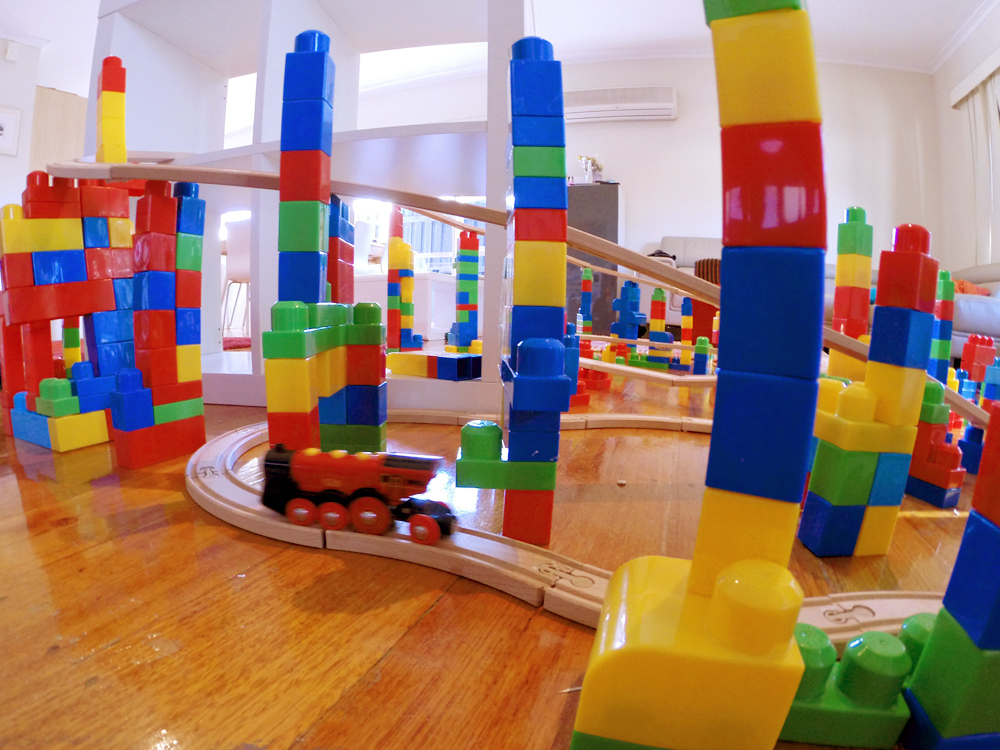 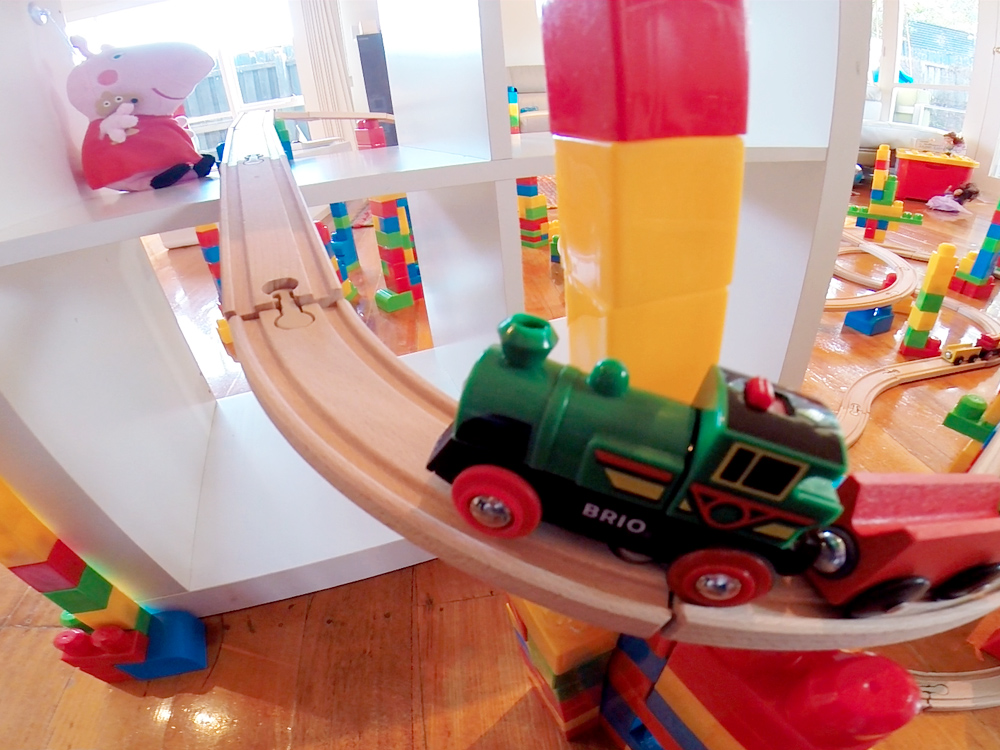 BRIO engine going around the bend 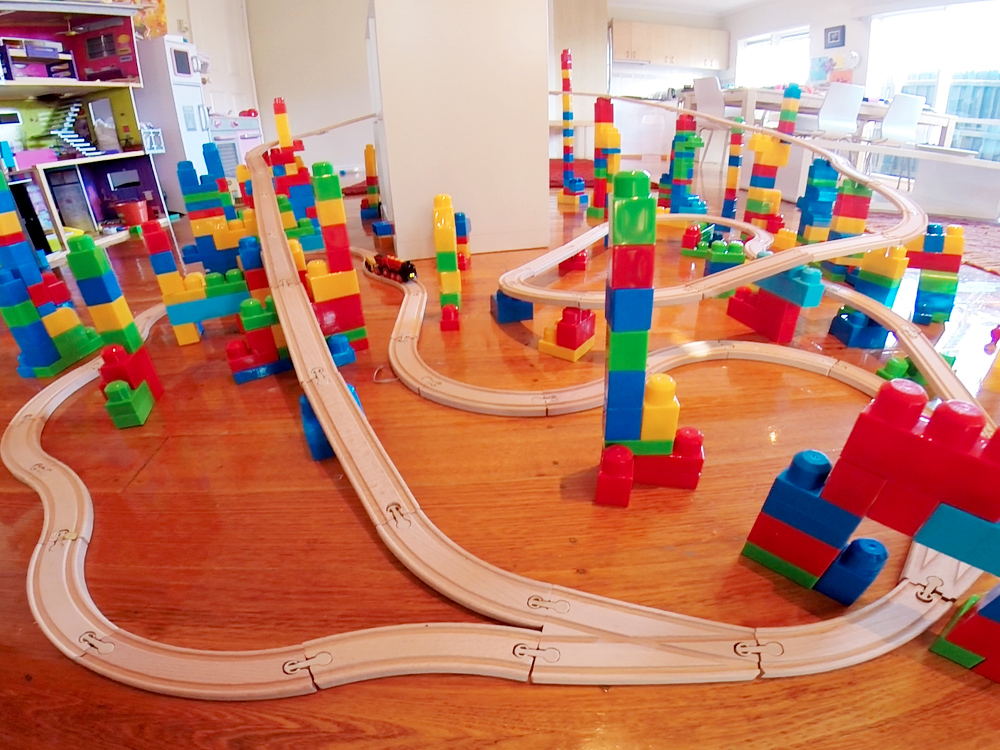 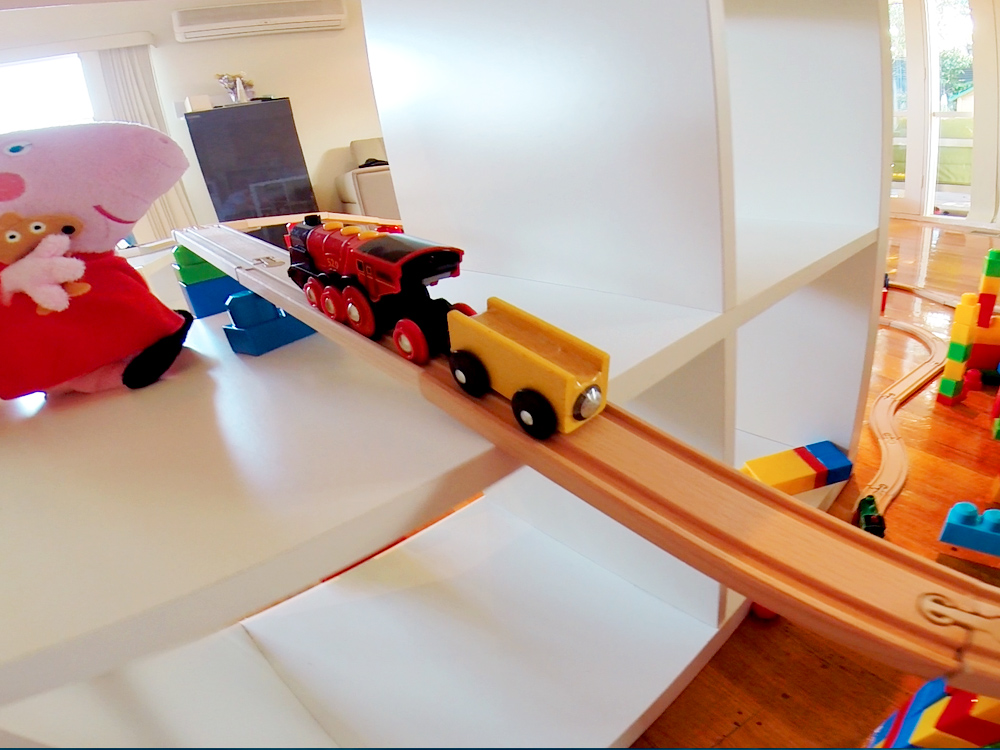 What if we made a track, which just went up? Round and round and round? Well this week we decided we’d find out. We call it the roundabout summit and its surprisingly sturdy. Our little brio engines also made it up alright — although going down was a slightly different story ☺ We weren’t quite sure how to finish it as the top but Keira was quite to find a solution! Check out the video as we reach the train summit.

Check out our other tracks here or on YouTube: http://www.youtube.com/projecttraintracks 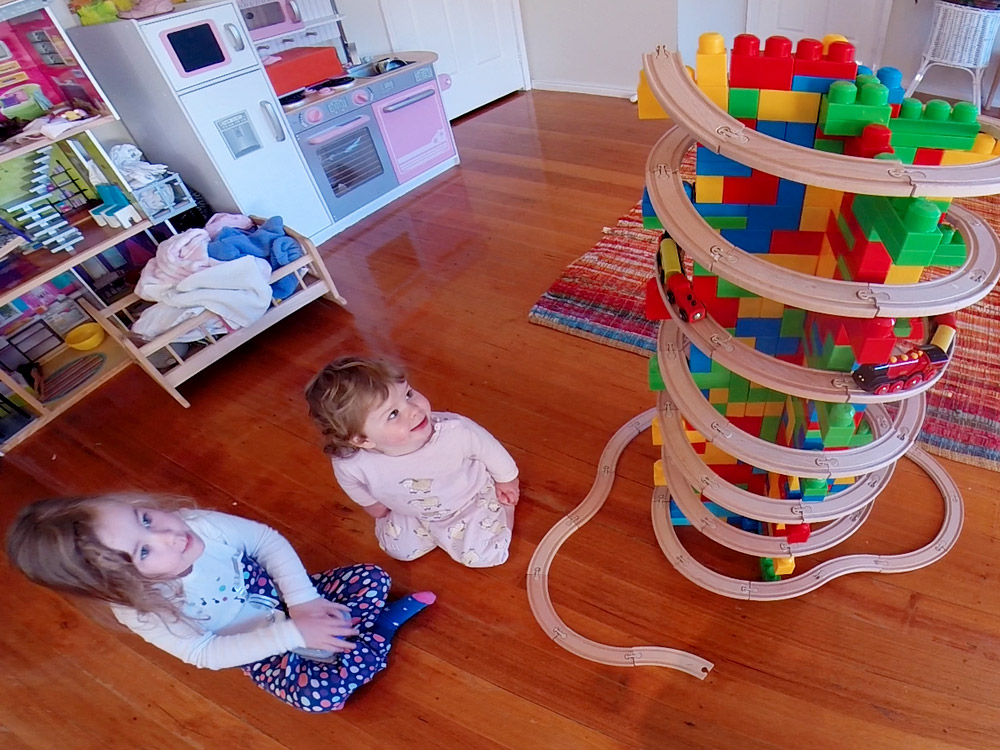 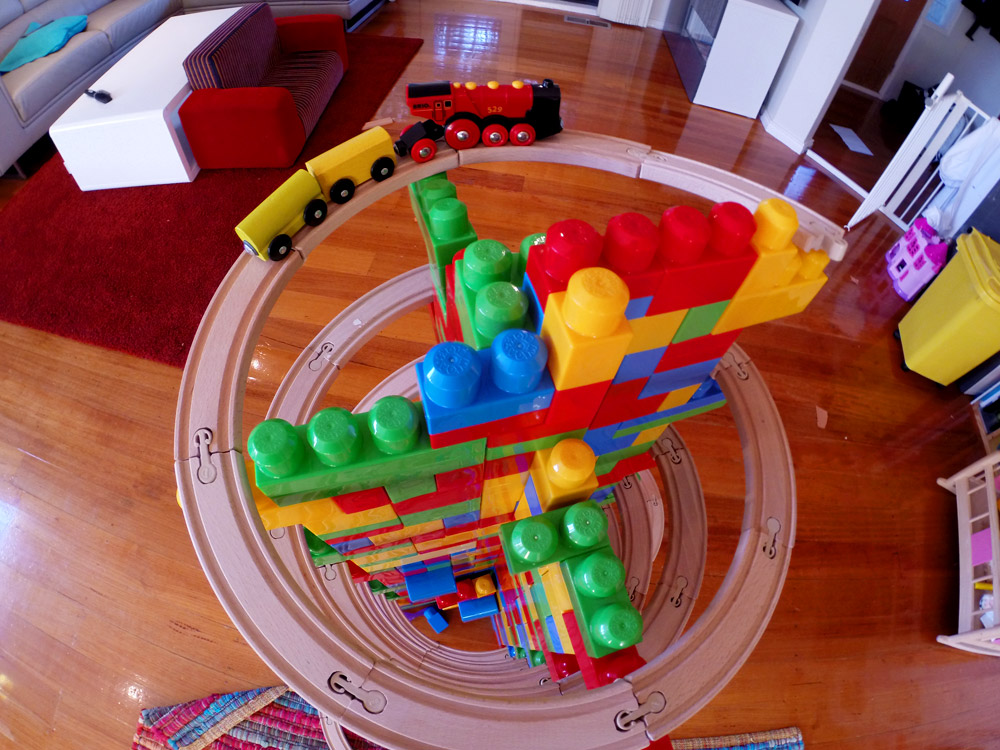 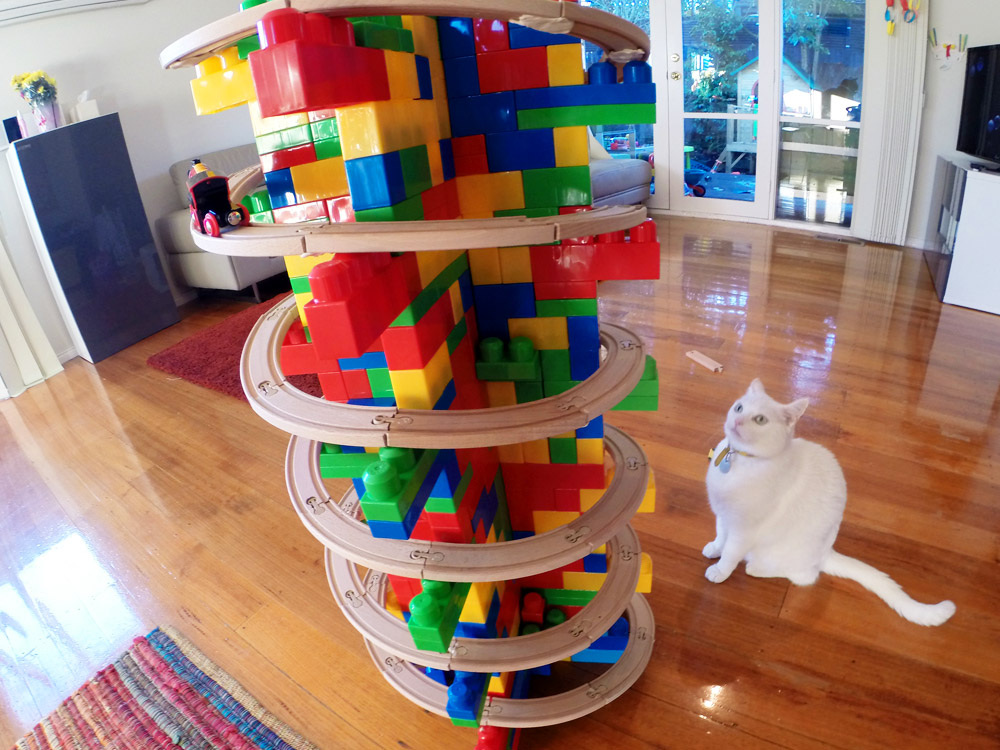 Huge train track being checked out by Gizmo 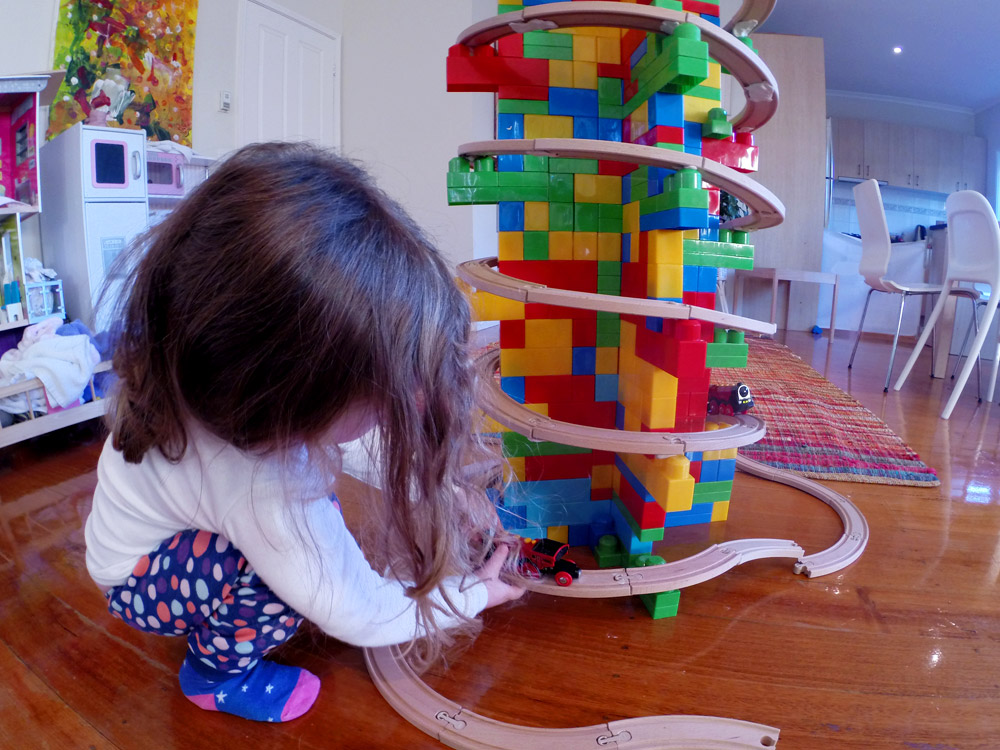 Brio train at the start 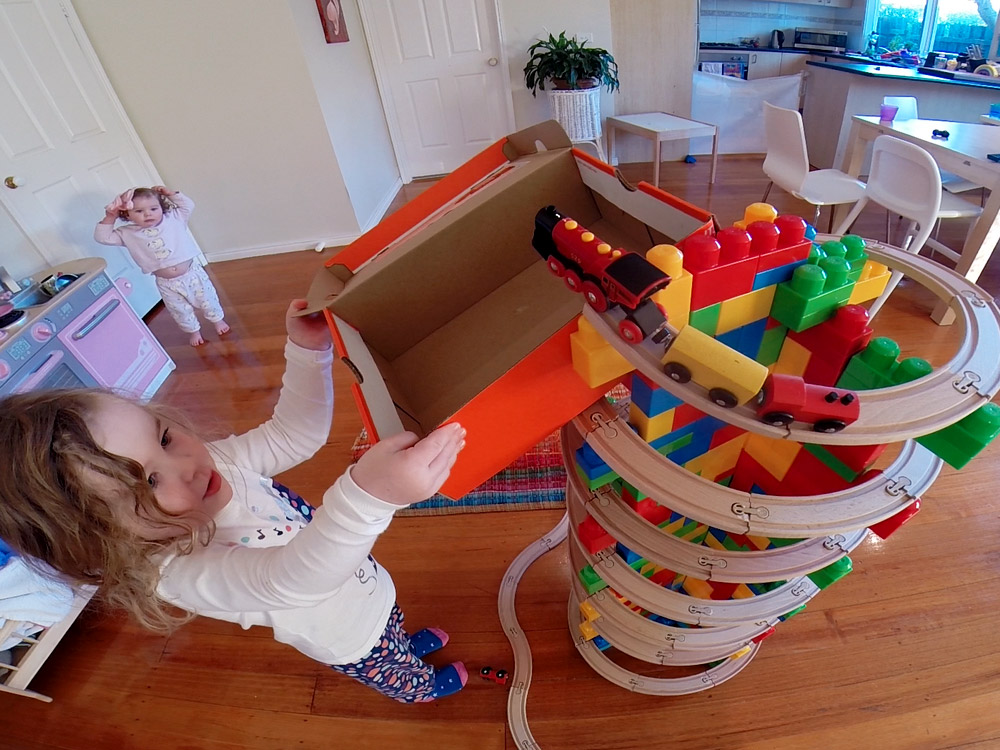 Huge train track being checked out by Gizmo

Can we wind the track up over the step and through the cubby house door, the window and then back? Well that was what we asked ourselves and the only way to find out was to give it a try. We even had a little bit of fun with a GoPro on one of the engines – a different perspective from down on the IKEA track. We loved Keira’s expression as it came round the bend . Our IKEA toys were given a serious test with this track.

Oh and yes Keira has a rainbow on her forehead – she got that at a birthday party at Kinder – very cool! 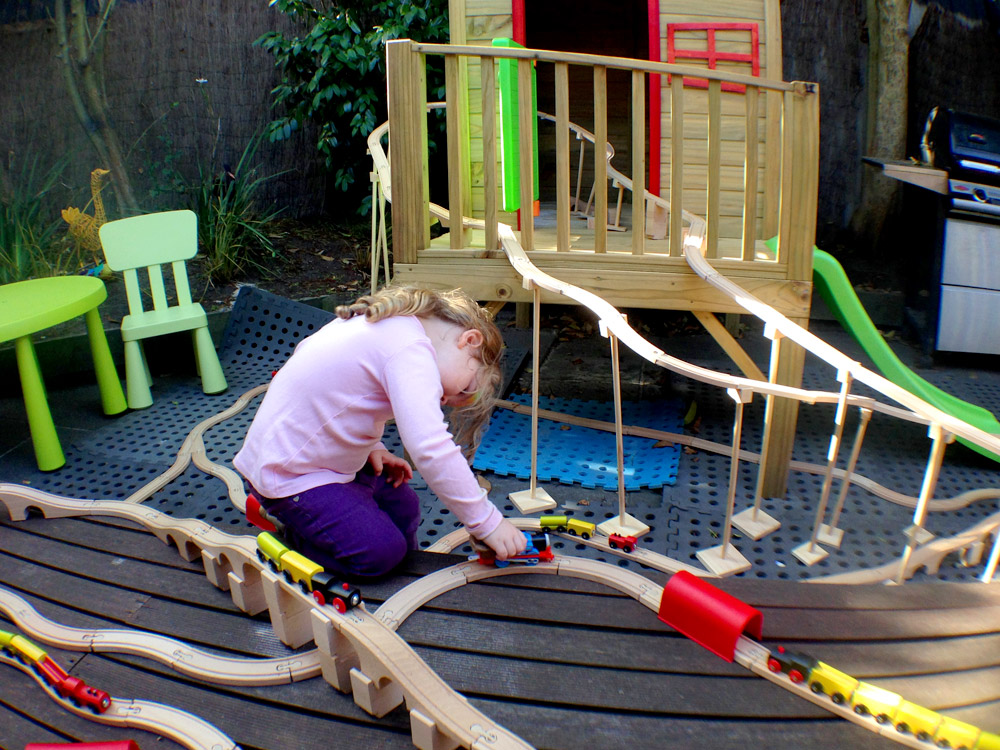 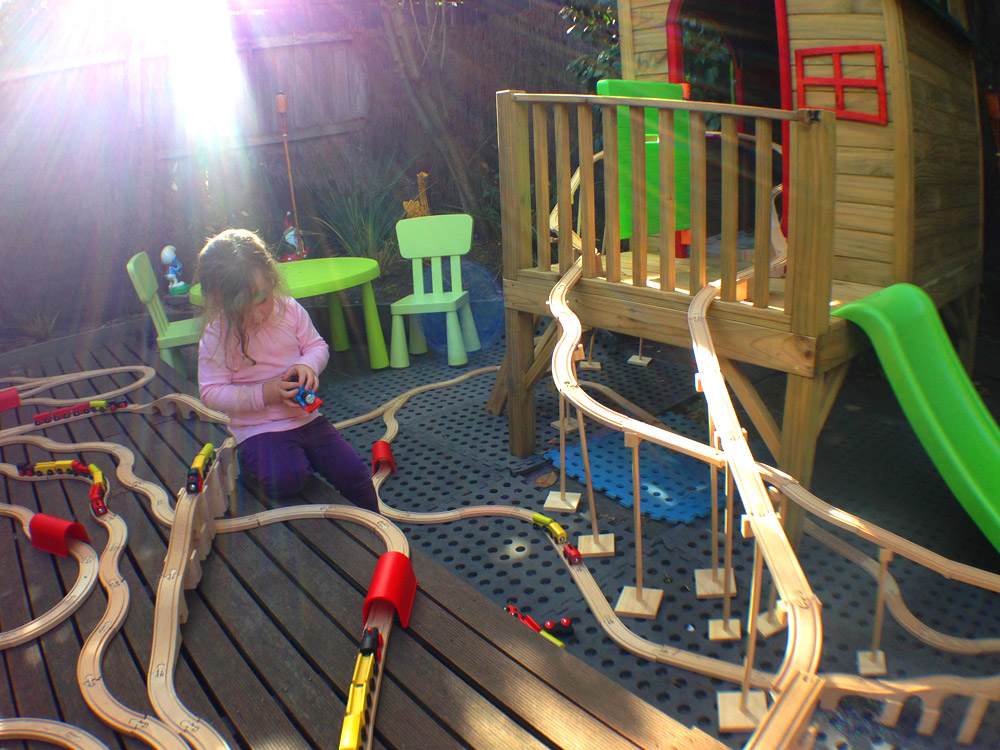 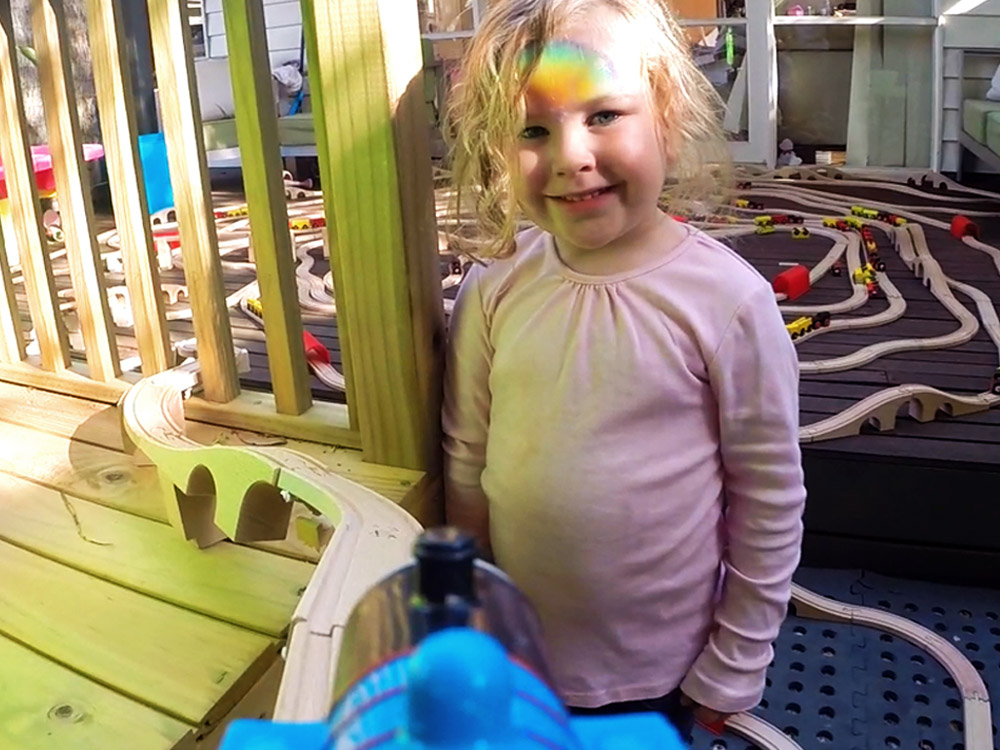 View from Thomas the tank engine

So it’s 6am on a Sunday morning … what do you do? Go for a run round and round the living room of course! It was exhausting just watching them — at least I had the excuse that I was building the train track (not sure I could have kept up!). This week’s railway took a long time to make — we even took a break halfway through 🙂 It was great seeing Arya really playing with it a the end and Keira found our stacked furniture was good at keeping the tracks in place. 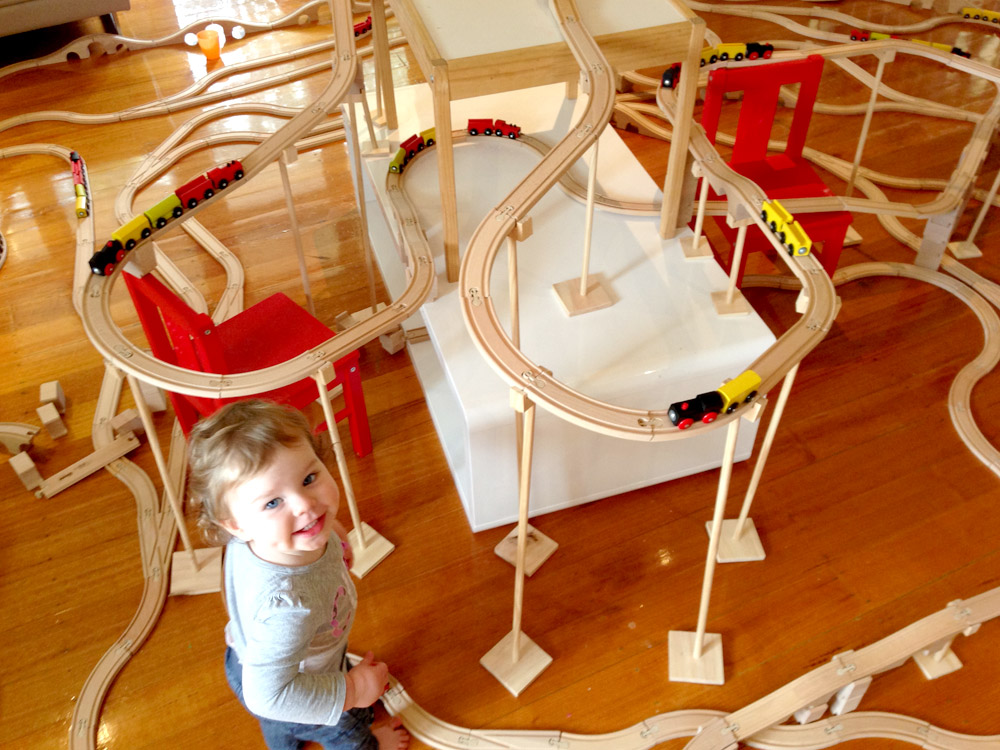 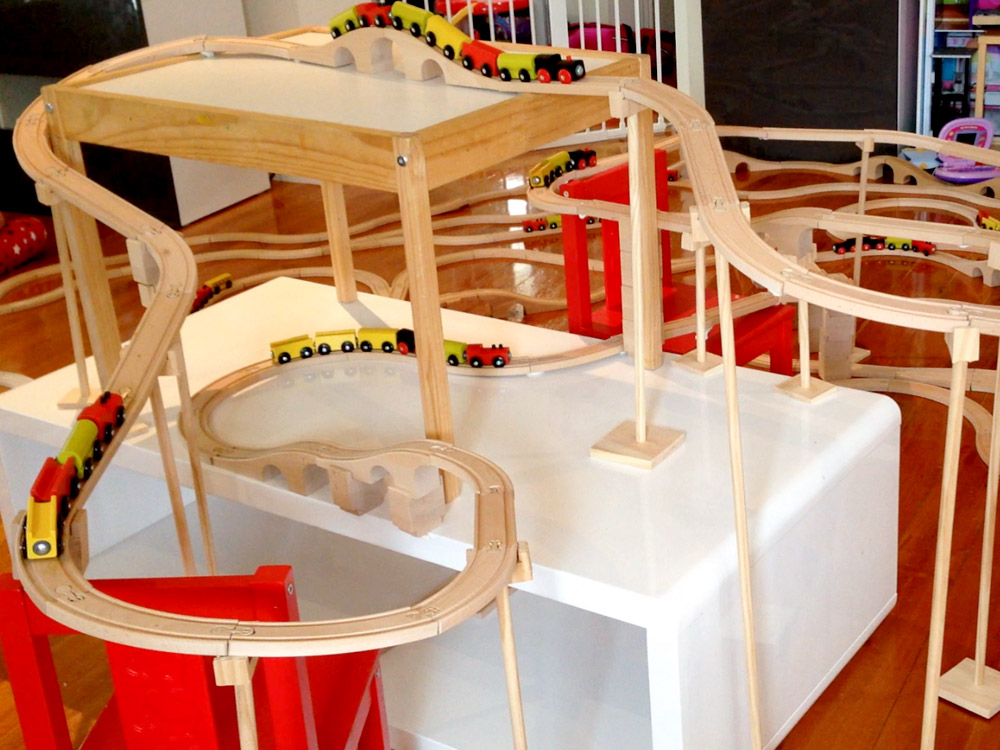 IKEA train tracks winding around the chairs and table 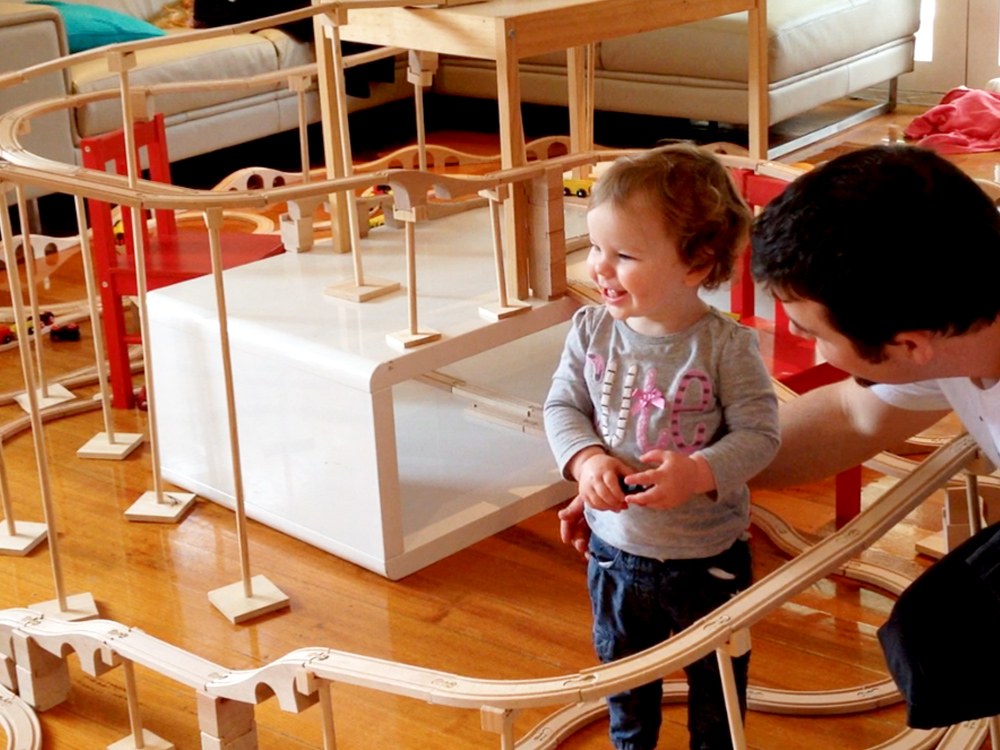 Happy times with our toy trains

A roller coaster was what we aimed for this week. With a double loop and an incline for only the bravest – it was a heck of a track to play with. It also had some good places for a three year old to hide! 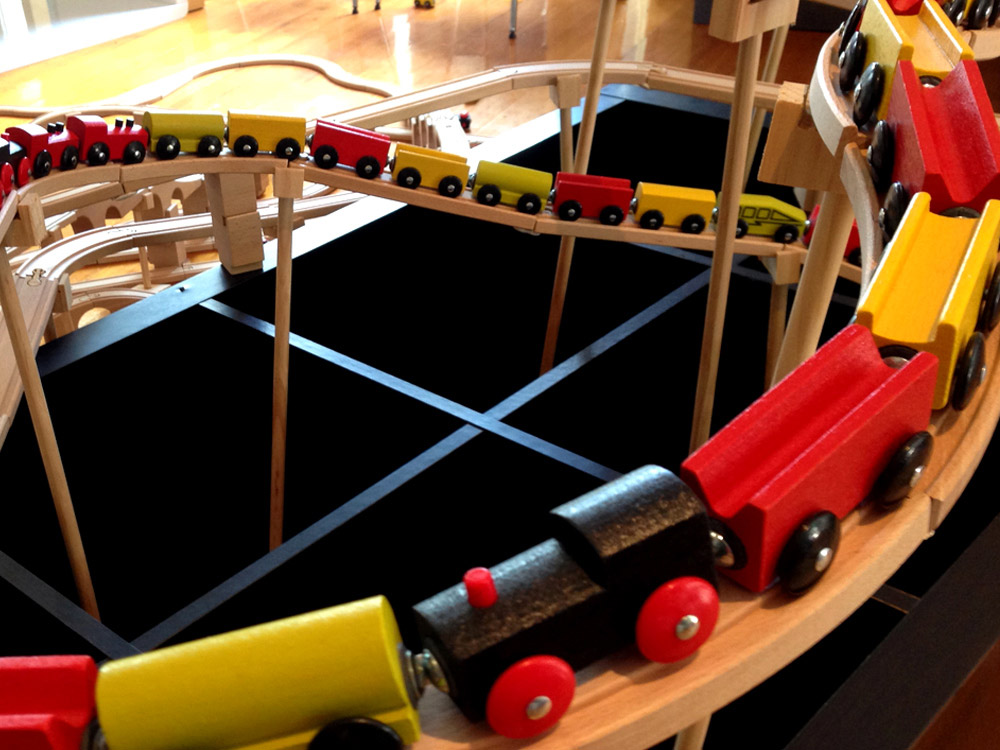 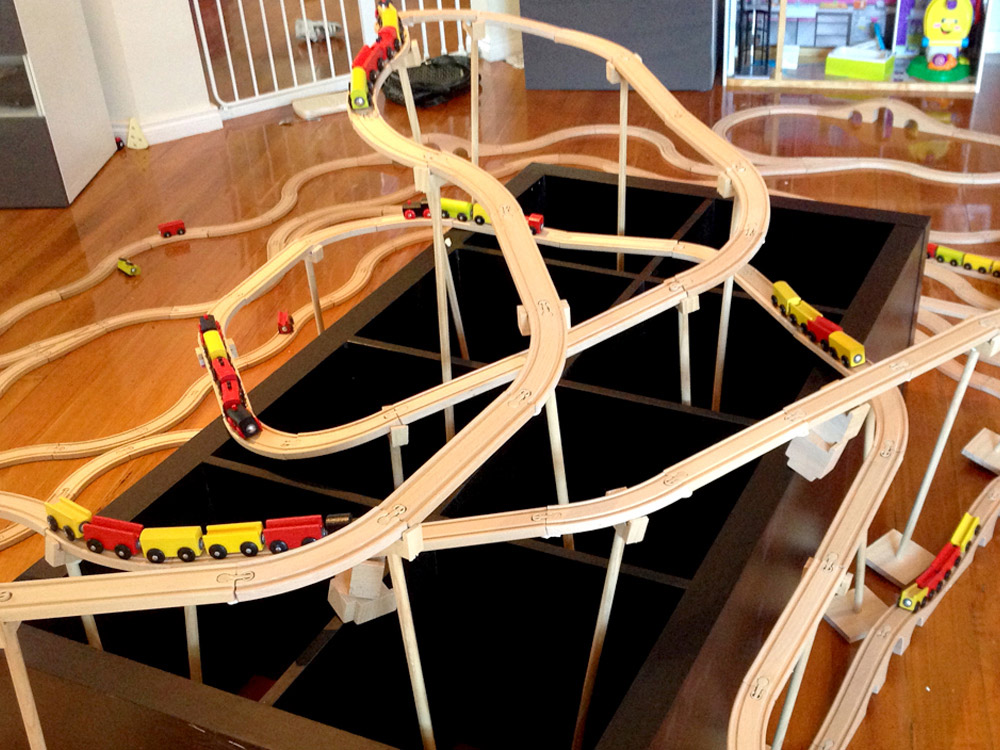 Coming round the mountain – #21

Keira and Arya’s table and chairs became the centre piece for this IKEA train set. Firstly weaving around them and then building up and over them. The final piece started to look quite impressive! 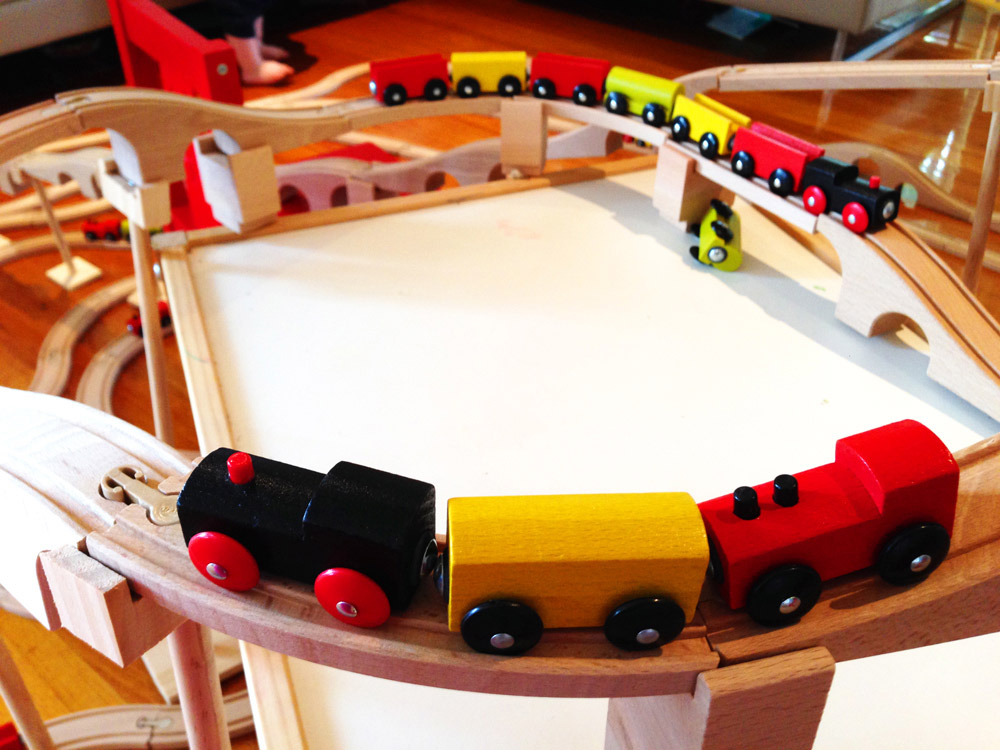 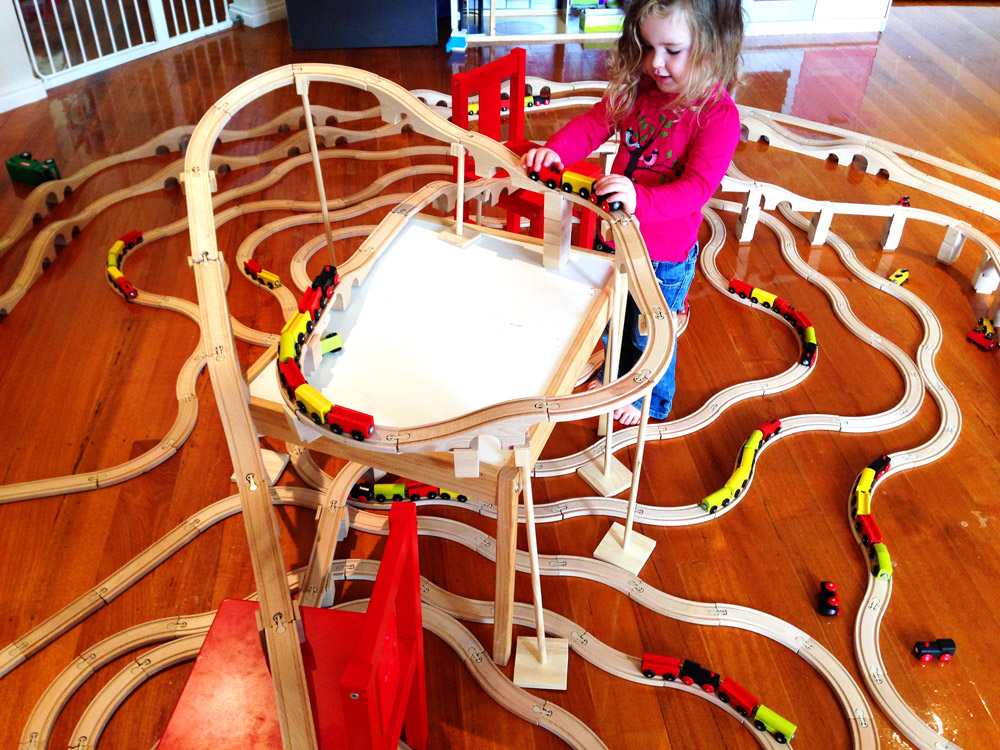 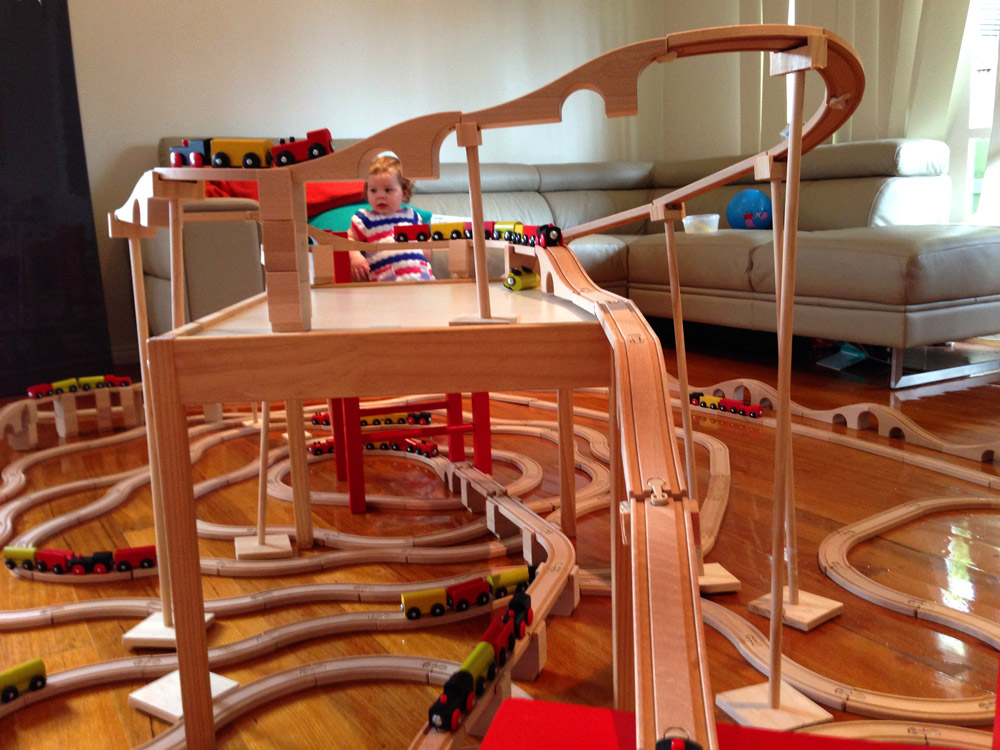 With some nice weather we decided to venture outside this week. Scarlett our black cat found this all very interesting and the cubby house made a fantastic loop for the track. 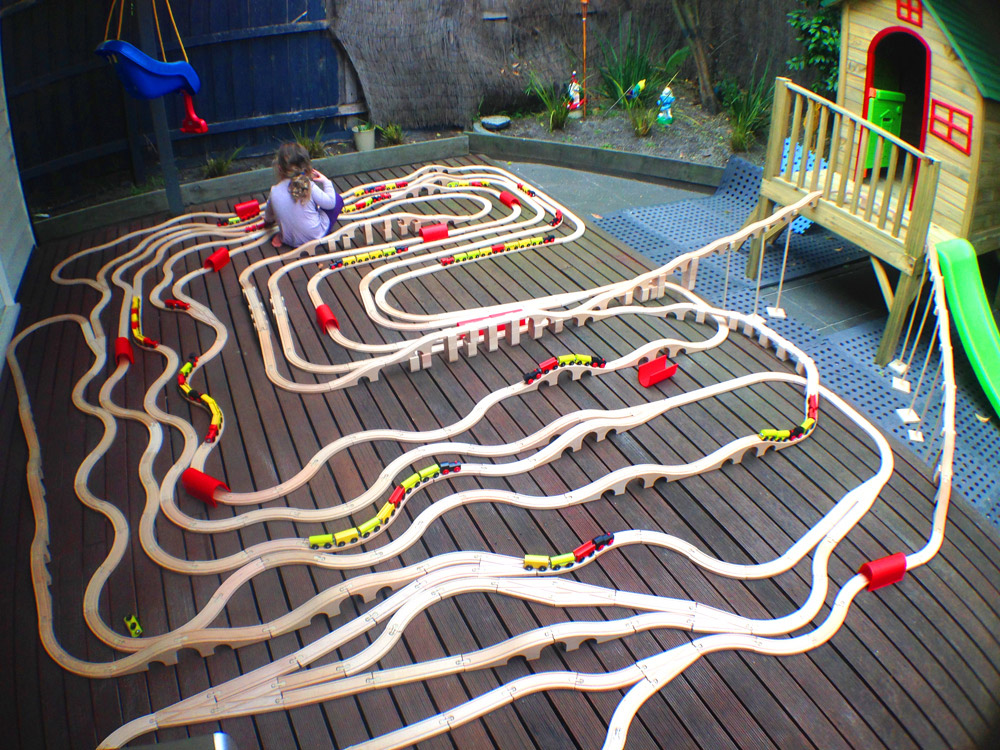 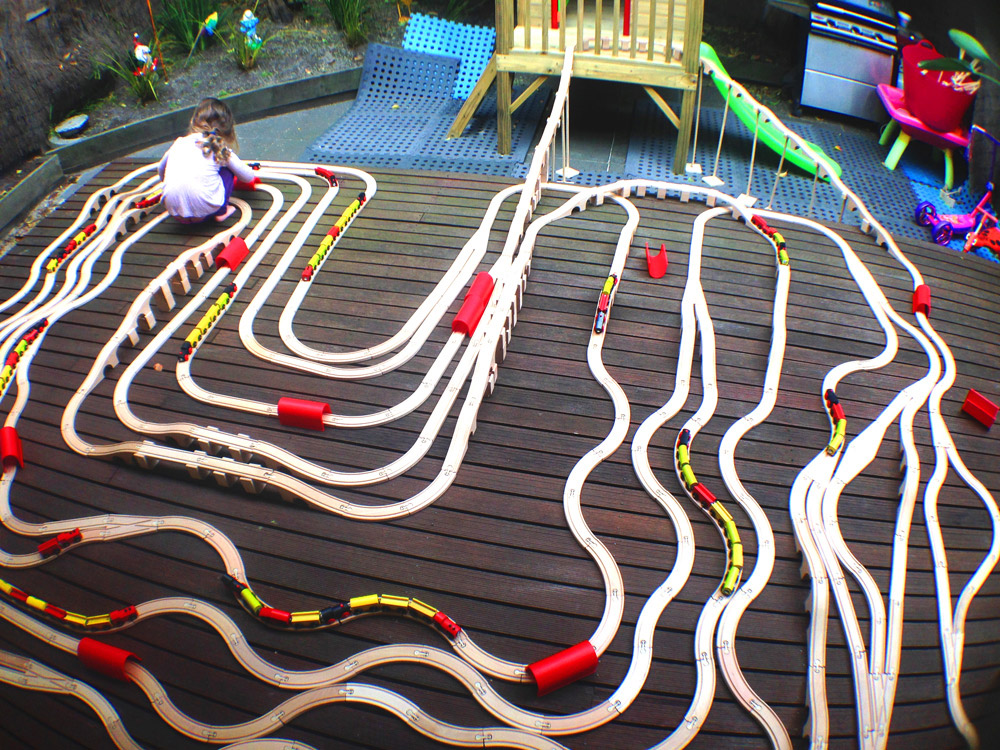 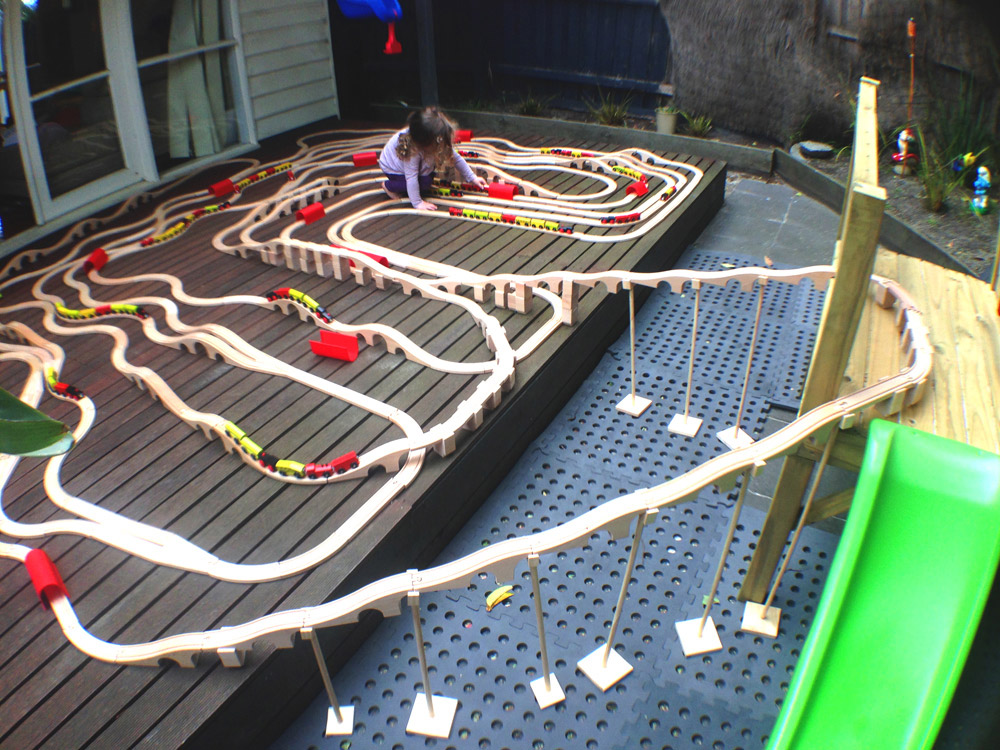 Wishing you all an awesome 2014 – oh and yes it is meant to be the Sydney Harbour Bridge 🙂
This train track was a lot of fun. We had had the idea of using the sparklers but needed to wait for the kids to go to bed. This actually ending up working really well as they looked great when is was pitch black.
Happy New Year Everyone!